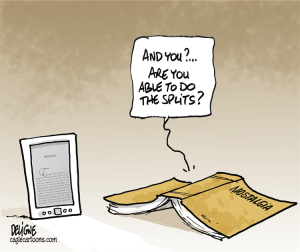 Before reading the articles on the Clark-Kozma media debate, I expected Clark to completely swear of technology, and for Kozma to embrace using technology entirely. I predicted that Clark would support no technology in the classroom whatsoever, and only use paper, pencils, and direct instruction in education and learning. Kozma, on the other hand, I thought would opt for entirely online, self-directed courses, using Smartboards, videos, and mediums like digital games to connect students learning without direct in-person instruction. A debate is usually black and white, with one side opting for no technology at all, and the other supporting it entirely for all learning. What I discovered, after reading and watching supporting videos regarding the Clark-Kozma media debate, is that it wasn’t really a debate at all, but rather an elaboration and continuation of the examination of the usefulness of technology in education.

Clark presented the point that technology and media do not need to be present in order for learning to occur, and that only certain medias are more effective for certain learners, learning goals, and tasks (Clark, 1994). I agree with Clark’s point that the media and technology aren’t necessary for the learning to occur; teachers and educators must be present in some form or some point of the learning to direct the students to the correct learning outcomes. There needs to be critical assessment from the teacher to ask “is this media supporting what the learning outcomes of the student are?” The media is the vessel or portal from which the content and lesson comes from, but the media or technology platform is not the source of content or material. In order for the media to be used effectively, there has to be a source of knowledge or information that is integrated into the technology. Let’s look at a Smartboard, for example: the Smartboard alone is not what the students are using to learn; they are learning the content that the teacher or educator has loaded onto that technology which is then presented through the Smartboard media in an integrated way that is captivating and experiential. Without the effort from the teacher to load the videos, whiteboard notes, slideshow animations and content, the Smartboard alone would not be the source of learning, it would just be a blank digital screen. The merging of content and media is effective because it delivers content in a dynamic, multimedia way which is engaging to learners.

The reason I feel that this Clark-Kozma media debate is less of a debate and more of an elaboration is because Kozma seems to take Clark’s points of replaceability, and the inability to learn from media alone, and find a space that media can be effectively used, despite its shortcomings. He acknowledges that media alone won’t deliver a lesson, but he does support the idea that media can be used to deliver a dynamic, engaging platform to deliver otherwise dull or difficult content. His argument that using media is a complementary process connecting the learner, content, and technology to allow for the information to be processes in a multitude of ways, including visually, audibly, and kinaesthetically, is one that I agree with. His perspective on technology comes across as an agreement to Clark’s perceptions of the shortcomings of technology and seems to offer a solution for where technology and media can be useful in education. That being said, if I had to pick a side in this loosely defined debate, it would be with Kozma because of his practical merging of technology, media, and learning.

It has been 25 years since the Clark article was written, and a lot has changed in terms of media and technology both inside and outside of the classroom. Smartphones were an inconceivable notion of the future, and just having one computer in the entire school was deemed as high tech. Students were taught using blackboards, paper, pens, and textbooks. Teachers taught at the front of the room in a face to face manner, and once they left the classroom the only way to connect was over the telephone or waiting until class the next day. I can relate to Clark’s views on technology because given the time when this article was written, there was skepticism on the new wave technology and how it would change the world we once new. Terms like “new-age”, “revolutionary”, “the computer of the future” were being tacked on to computers, calculators, and technology programs which gave the sense that it was hokey and a gimmick. I can imagine that teachers were not receptive and unsure about spending all of the school funds just to have a computer in their classroom which may become obsolete within the year. Technology was so new in schools and educators were not largely familiar with the programs or how to use the new multimedia devices, which meant they were not being properly integrated into the classrooms and learning. Computers were seen as a fun supplement to the learning and something to use for exploration and free-time after the real learning had occurred. In 1994, the World Wide Web was invented, so it is no wonder Clark did not see a connection between technology and learning… because it was such a new idea!

Flash forward 25 years later, with over 45 billion web pages existing and everyone owning their own smartphone with endless internet access in their own hands, technology has changed quite dramatically since the release of Clark’s article. It takes a few generations for new ideas to become integrated into large social groups, and the same goes for integrating and finding useful ways for technology to become part of education.

The new BC curriculum has suggestions for technology in every subject, and courses around media design, computer science and digital literacy have been created as a response to the changing job market, and presence of technology, electronics, and media in today’s society. What was once a flashy new invention is now an everyday, completely integrated existence. While Kozma’s article was also published in 1994, his views on the integration and supportive opportunities for technology and learning apply to our education system and student needs in our schools today. I am supporting my students through an introduction to computer science course, where they are learning the basics of coding, algorithms and computer literacy. The entire course is run through an online classroom, where instructors based in Vancouver are leading the course from their offices remotely. The instructors are experts in computer science, and have developed a curriculum to support the students learning of basic computer science. From Kozma’s perspective, the online classroom is not the source of the learning, but rather the support and platform through which the learning process occurs. The use of videos, digital whiteboards, coding games, and programs like SNAP! are used to transfer the instructors knowledge of computer science and coding to the students. Without the media, this learning could not occur, or would be much less effective, because the communication of ideas and theories revolving around computer science could not be as accurately demonstrated or taught.

There are implications for the misuse of technology in the classroom. The first is with students taking advantage of the media in ways which are not productive to the learning process, such as texting on their phones or playing games on the computer when they are supposed to be using their phones or computers for research or watching a movie. Technology and media redirect the control of the teacher, and it may be harder to manage a class when the technology is being used. It is difficult to manage a course when the instructors are online and not in person, or when students are asked to watch a movie about space travel, rather than learn about it from the teacher on the board at the front of the room. Direct, face-to-face instruction, with limited supplies is the easiest teaching situation to manage in terms of staying on task and classroom management, but that isn’t what learning and education should be about. Students need to have opportunities to explore new technology, outlets for learning, and be given a chance to learn though a multitude of ways. There is a time and place for media just as much as there is a time and place for teaching a lesson at the front of the room with students using pencils and paper. In this day and age, technology has come a long way and it is important to harness its potential to support the learning of our students.

Education is such a broad subject, with many different aspects involved in learning and students. There will always be new technology, fads, and initiatives developed which claim to be the next best thing in education. These new ideas and initiatives being introduced all the time include technology, programs, methods, and curriculum. Each new idea will spark debate amongst educators, because we work in a passionate field where everyone aims to provide the best learning experience for their students. With new fads and studies coming out, debates will form over which ones work the best for students. There will be topics or tools that I will disagree with, or see as impractical, but in order to deal with conflicting opinions, it is important to keep in mind that educators will always have their students best interests in mind and that we are all working towards the same goal of creating educated citizens of the future.

Theme by Anders Noren — Up ↑